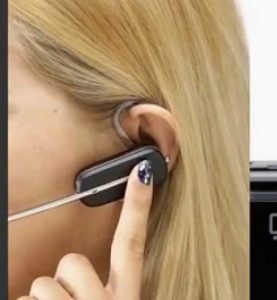 With all of the attention recently brought up in the media about cell phone usage & a potential link to brain cancer or tumors, I felt it necessary to clarify some things for Headset users. First, let me start off by stating that I in no way claim to be an authority on ANY health matters by any means. My field of expertise is in Corded, Wireless & Bluetooth headsets. The following was merely gleaned from a recent article appearing on CNN & Larry King, featuring some of the world’s most renowned neurologists & researchers on this subject.

There are 3 different types of “Cordless” devices that I will be discussing here: Cell phones, Bluetooth headsets, & Wireless headsets. Try not to get confused between Bluetooth & Wireless headset; Bluetooth by most accounts offers a range of about 33’ (Some newer technology offers 100’ to 200’) & the sound quality is substantially inferior to that of a “Wireless” headset (300’ to 400’) which is equal to or greater than a cordless telephone in quality ( Plantronics CS540 Wireless Headset for example).

The question raised in this debate, isn’t so much about the headsets used with cell phones…but rather the cell phones themselves. Cell phones emit a type of radiation called Non-Ionizing, which by most accounts is harmless as far a modern testing will allow; As opposed to Ionizing Radiation, such as produced by X-Rays, which can cause severe problems with over usage. And keep in mind that the radiation that your cell phone emits is coming from the antenna itself…not the speaker or the body. So, the further away from your body that the cell phone’s antenna is, the better off you are.

Here are some notable quotes from the interviews:

Dr. Sanjay Gupta (CNN Chief Health Correspondent) – As of 2007 there were 255 million cell phone users. As of right now, the evidence is inconclusive that cell phone usage can cause brain cancer or tumors. It will be at least another 5-10 years before anyone will have a definitive answer.

Dr. Keith Black (Cedars-Sinai) – It’s pure skepticism that they can cause cancer.

Dr. Michael Thun (American Cancer Society) – I am very skeptical that cell phones are the cause of brain cancer due to their low emissions.

FDA, American Cancer Society, & World Health Organization – After extensive research, there is no evidence to show that cell phones or Bluetooth headsets cause cancer & there is no cause for concern.

All of the Doctors agreed that although they can’t prove that any wireless device is 100% safe, that the use of a Bluetooth or corded headset is definitely the best way to go.

*Cellular Phones –
Emits Non-Ionizing radiation from the antenna. Inconclusive evidence of ill affects on the brain.

*Bluetooth Headsets –
Have such a low emission rate that it’s barely detectable. As of this date, there is no proof of any ill affects on the human body.

*Wireless Headsets –
No different than your average home cordless telephone. Testing by all modern methods & standards show no ill affects on the human body.

*Corded (Or Wired) Headsets –
By far, the safest bet for anyone even remotely concerned about potential damaging affects. Corded headsets emit zero (0) radiation, nada, zilch! However, the way that you carry the cell phone itself, can still potentially cause a problem.

Here are a few tips to avoid potential exposure from your phone: