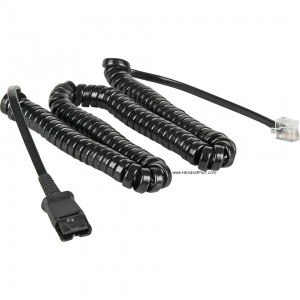 – Which Plantronics headset cable will work with my phone?

A question that we are asked daily is, “Which connection cable do I need for THIS headset to work with my phone?”

Well first off, almost all headsets & parts are proprietary into their own brands. So, while there may be a few oddball cables out there that claims to work with the big name-brand’s equipment (ie. Plantronics, Jabra, etc.), let’s keep this simple & stay within the same brand as your headset. For now, let’s assume that you have a Plantronics headset (Called an H-Series Headset).

All corded headsets for Professional Office phones require 2 parts; the headset itself, and then the connection cable. This cable will vary depending upon your phone’s brand & sometimes even the model number. While most of these phone’s will use an RJ9 modular plug, that doesn’t mean that “Any old headset will work just because it has an RJ9 plug.” On the contrary!  Each phone manufacturer wires their headset ports different from one another. So remember, just because it fits…doesn’t mean it’ll work.

There are simply far too many phone brands to mention them all in this blog, so for sake of space (And your attention span) I will just list the most commonly used brands & which cables will work with them…in conjunction with a Plantronics H-Series Headset.

* Important note: Most of these cables look incredibly similar to each other. There are very tiny subtleties that can help to identify them, since they are not always listed on the cable itself.  My next Blog will go into how you can tell these cables apart from one another.